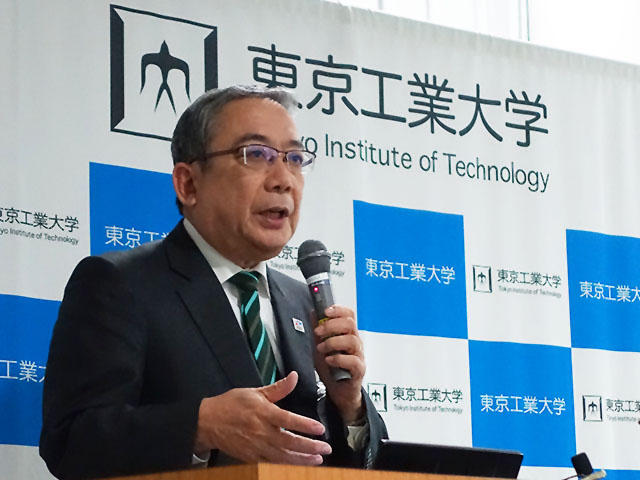 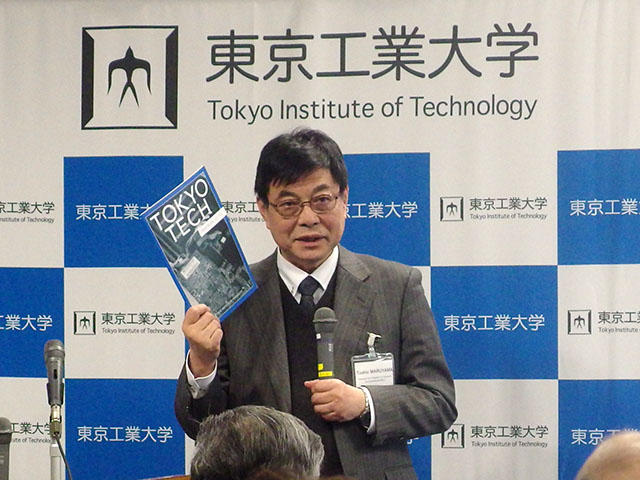 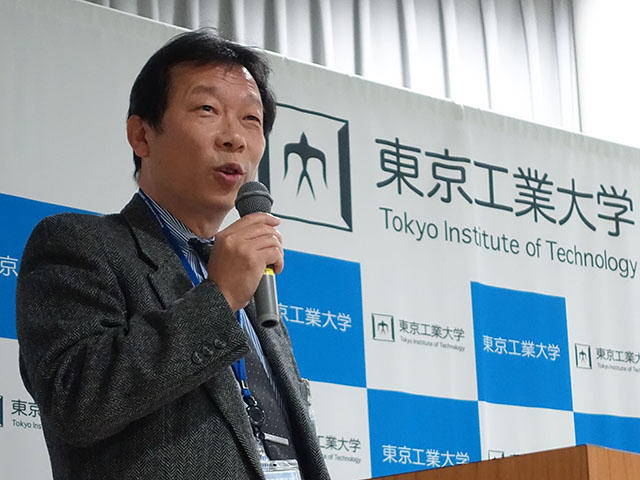 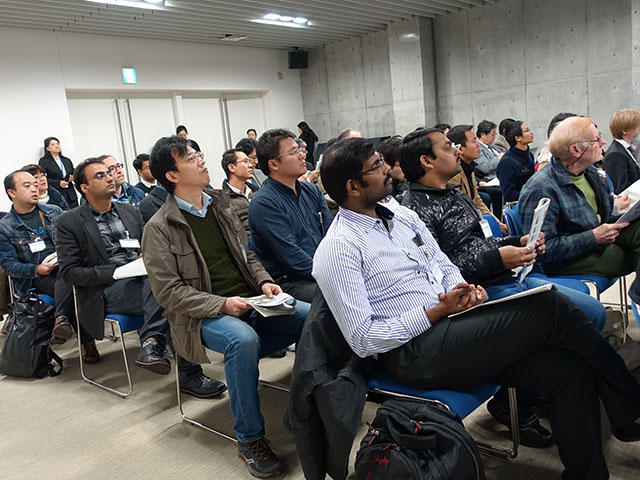 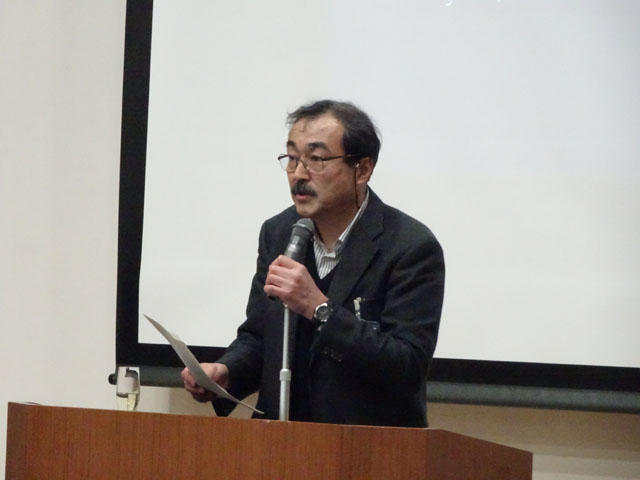 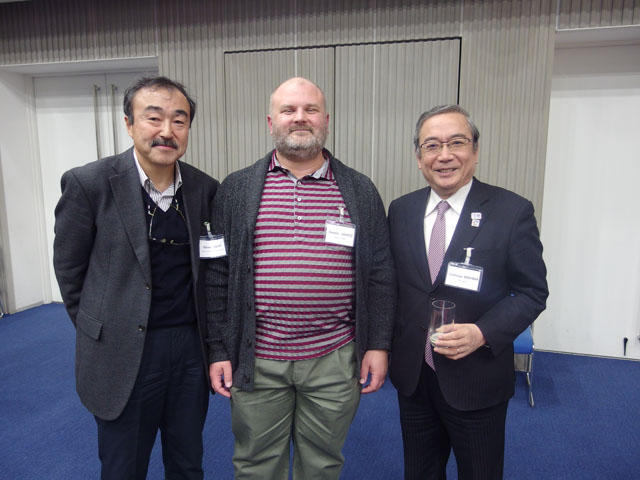 Guest speaker Gergely Juhasz with the president and EVP 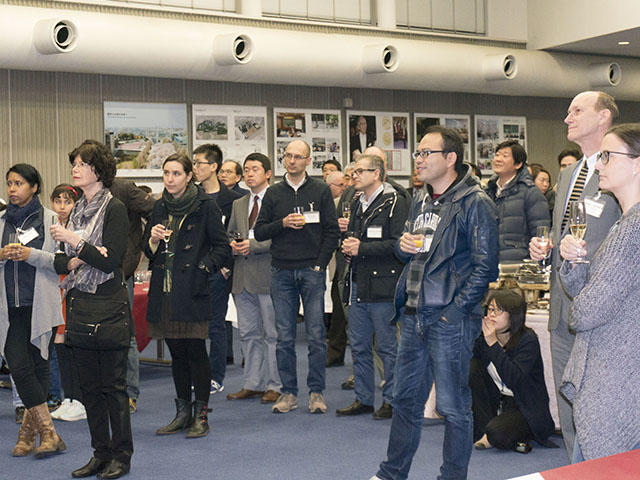 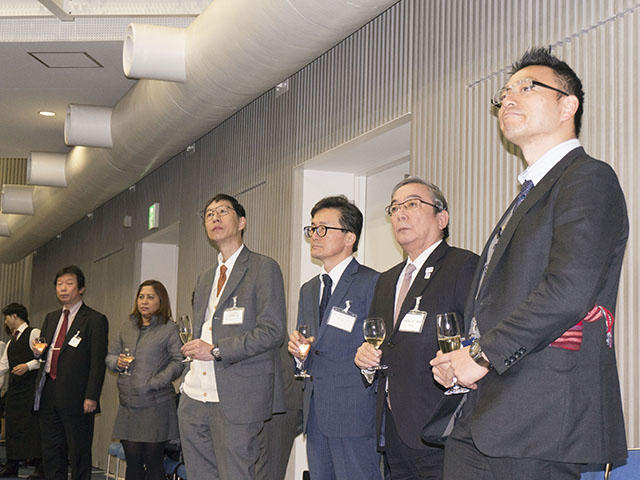 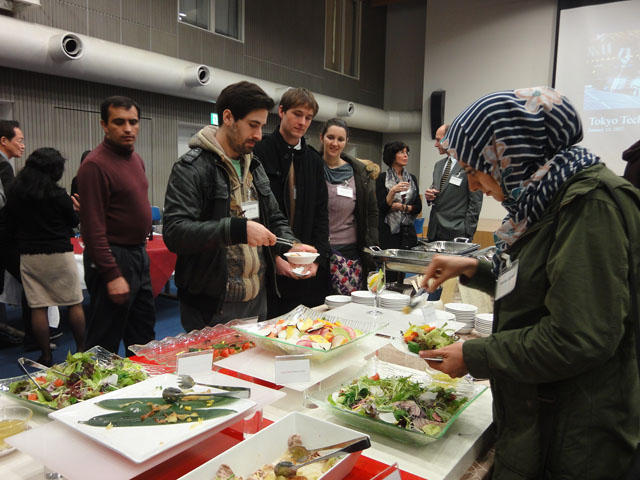 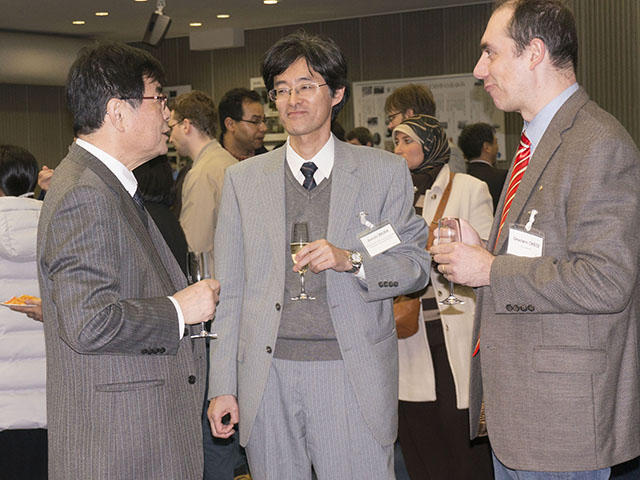 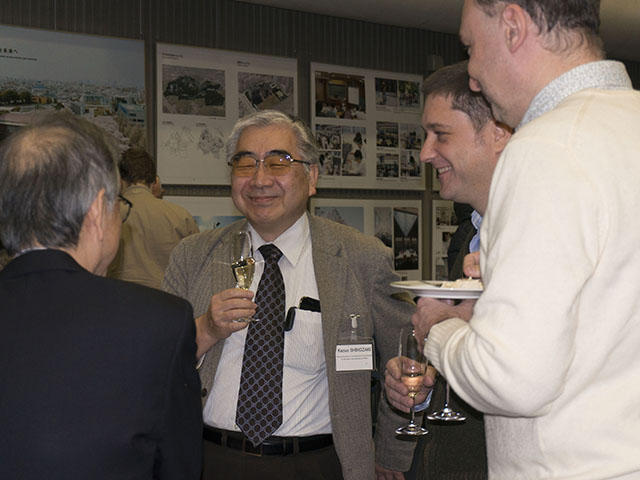 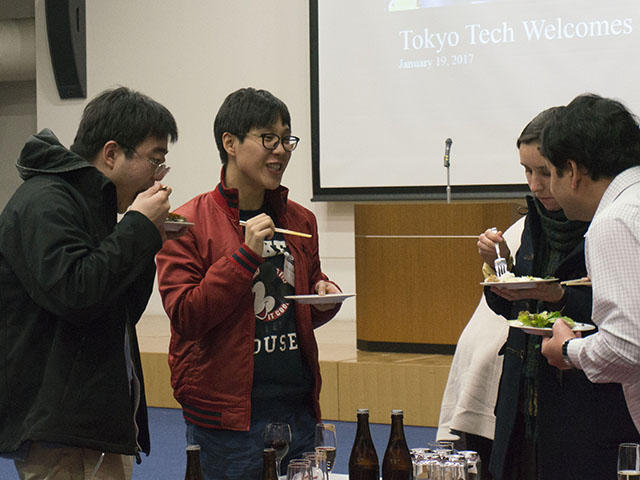 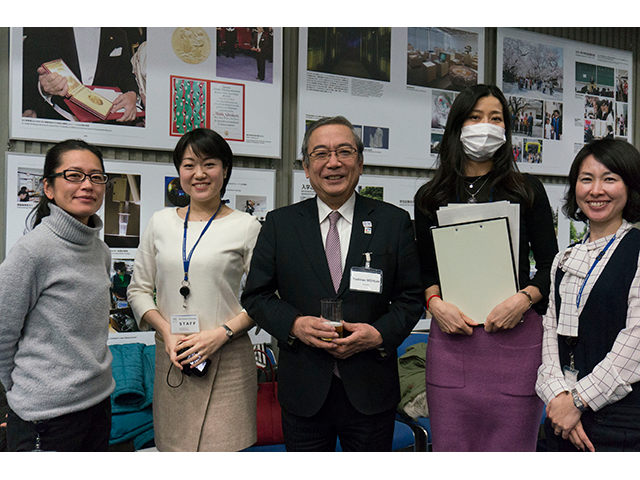 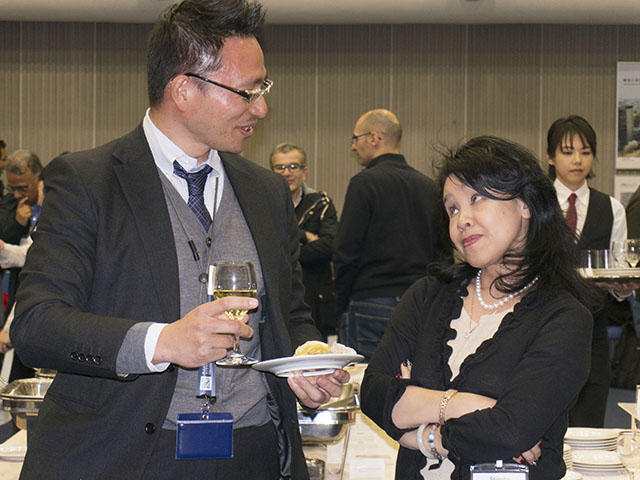 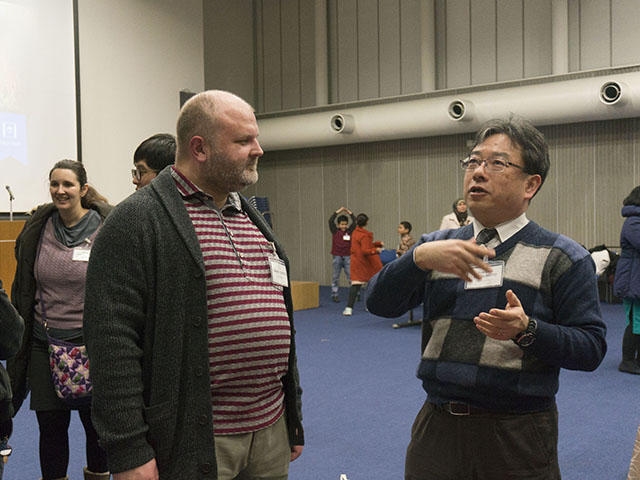 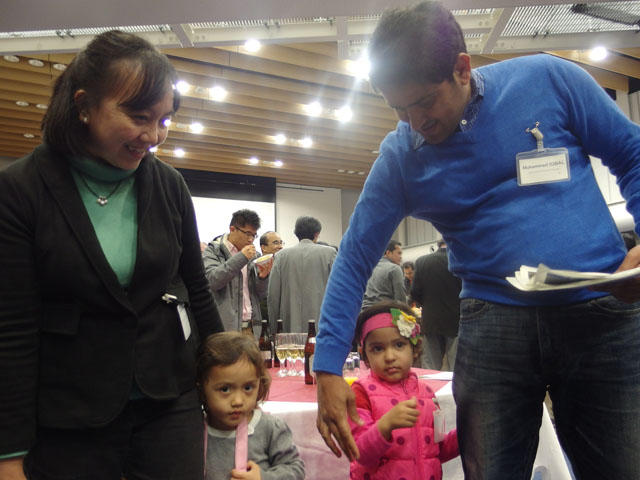 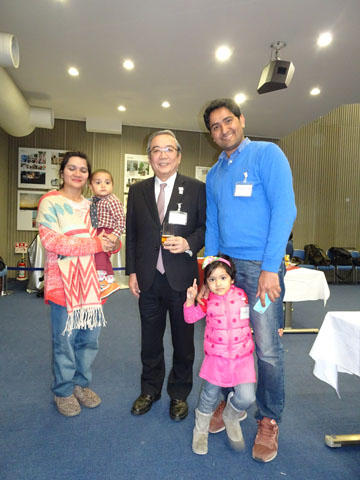 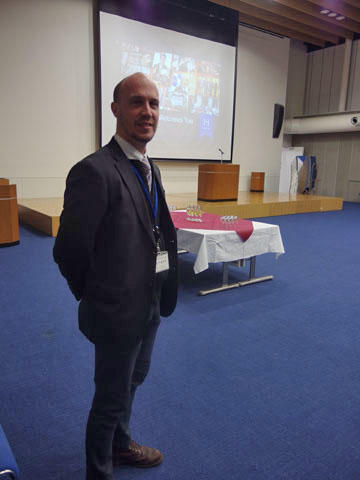 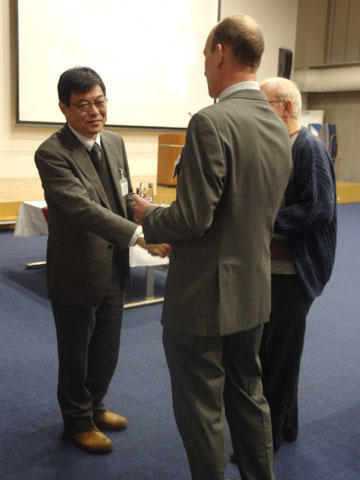 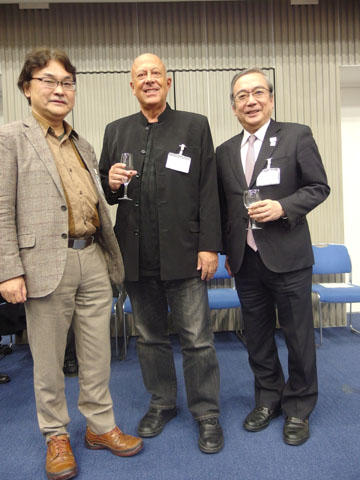 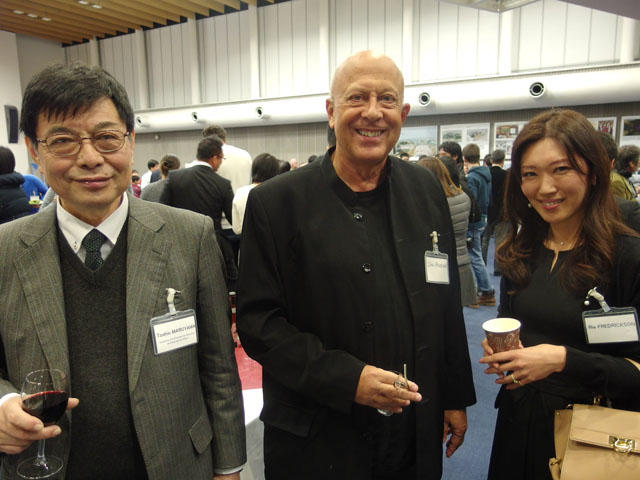 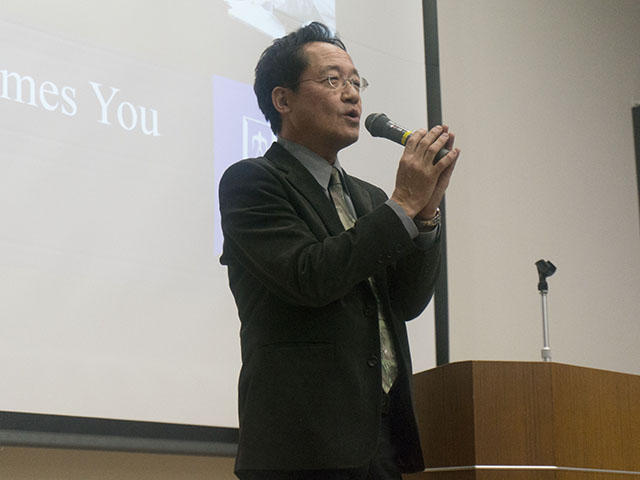 On January 19, 2017, Tokyo Tech held its 51st orientation and exchange party for international researchers, Tokyo Tech Welcomes You. Held twice a year under invitation from the president, the event provides an opportunity for researchers, faculty, and executive staff to come together in promotion of academic and cultural exchange. 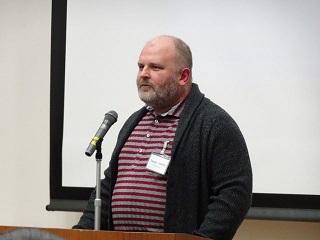 The guest speaker for the exchange party was Gergely Juhasz, a specially appointed associate professor at the School of Science. He joined Tokyo Tech's Department of Chemistry in 2015, where he leads an investigation on electrochemical reactions for a new type of fuel cell. The fuel cell is designed to use inexpensive, recyclable organic matter to produce energy. As such, the technology could be applied in the form of a clean-energy, rechargeable battery.

At the event, Juhasz spoke about his admiration of efforts by Japanese universities to "internationalize." He described how they are constantly working to provide more global environments and that even when programs are not successful, they learn from their mistakes. Juhasz also plays a key role in internationalization efforts at Tokyo Tech, where he teaches first-year undergraduate chemistry in English. In his courses, Japanese and international students study together. He explains, "To the foreign students, it is a message that we give them the same high-quality education as that given to Japanese students. For Japanese students, it is a message that we expect them to handle subjects like physics or chemistry in English, just like the foreign students. It is a place where they can be immersed in English while learning a subject that they are interested in."

Juhasz first visited Japan nearly two decades ago. As a student and postdoc, he spent several years at Kyushu University in Fukuoka. For newcomers to Japan, he advised, "Don't be afraid to ask for help. People are very helpful here and are happy to make your stay more successful. Sometimes problems may be lost in translation, but keep communicating, and they will help you."

Also at the event were Xiuzhu Gu, an assistant professor at the School of Engineering, and Sadra Karimzadeh, a JSPS postdoctoral research fellow at the School of Environment and Society. They were asked about their research and experiences at Tokyo Tech. 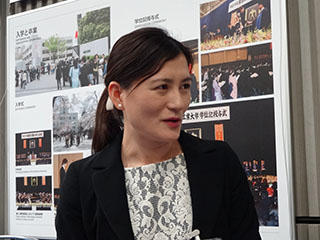 In September of 2007, Xiuzhu Gu came to Japan for a combined master's and doctoral degree, a Tokyo Tech program she found attractive because its lectures were provided in English. After completing an undergraduate degree in Shanghai in 2004, she began working at a Japanese company in Guangzhou, China, where she picked up a little Cantonese as well as learned a fair bit about Japanese working culture.

Since 2012, she has been working as an assistant professor in the Department of Industrial Engineering and Economics. In the field of industrial engineering management, she also learns in depth about human factors, operations management, and other related subjects. However, her main area of interest is "patient safety" -- an extensive study involving processes of making questionnaires, collecting data from healthcare facilities and incident reports, and assessing the safety of patients under the care of health care providers. In addition, she studies experimental research and descriptive methods used in many other fields, including nuclear and industrial sectors, and applies them to healthcare management. Gu considers patient safety to be the most important part of her work as analyzing accidents and healthcare management can greatly contribute to the health and well-being of individuals, and can ultimately mean the difference between life and death.

A big part of healthcare management that hinders the work and potentially the patient's well-being, she says, is the "blame culture", which she defines as management finding fault in and placing emphasis on individual error rather than taking responsibility on their part and encouraging fewer incidents via systematic approaches, such as process improvement and corrective training and education. According to Gu, this does little to prevent further and repeat errors, and can result in low employee morale. As such, she intends to dissect the roots of this culture in hopes that understanding it will shed light on its harmfulness and consequently help diminish its existence.

Currently, Gu and her colleagues are conducting research on "patient hand-off", which analyzes the changes in the patient's overall condition by following the accuracy of the details before, during, and after transfers -- whether it be from the ambulance to the hospital bed, between hospitals and clinics or wards -- and as the nursing staff change shifts. Many factors contribute to or result in erroneous information or the ambiguity of responsibility, consequently causing adverse effects to the patient's health, if such crucial details are not properly managed.

She happily recounts her life in Japan as "easy and convenient" due to a great environment and unique opportunities, in addition to kind and helpful professors at Tokyo Tech, the latter of which helps significantly in one's research and studies. The Institute also allows Gu to independently conduct research in her areas of interest, a freedom she says would less likely be granted at a company.

Dr. Xiuzhu Gu's group, led by Professor Kenji Itoh of the School of Engineering, is the first of its kind in Japan, and among very few groups in Asia in general, to conduct research on safety culture in the field of healthcare. 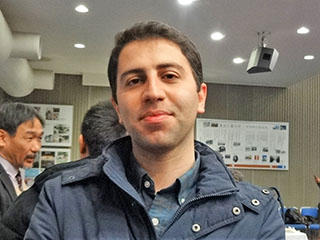 Dr. Sadra Karimzadeh obtained his Ph.D. from Kanazawa University in September 2015, and has been a JSPS research fellow at Tokyo Tech since November 2016. He spoke about his research on the different aspects of earthquakes and their related problems, as well as the use of new technologies such as geographic information systems (GIS) and remote sensing. GIS are computer-based tools for mapping and analyzing features on Earth, while remote sensing obtains data via sensors on airplanes or satellites on disaster-stricken areas. Satellite images, for example, can depict damage caused by an earthquake at specific locations, the details of which are then communicated to rescue workers who go to the sites in search of and to aid victims.

The most satisfying and important part of his work, Karimzadeh says, is that to study, understand, and predict earthquakes to a certain extent can potentially help save the lives of those affected by them. His current research involves the use and study of remote sensing and satellite images to help with disaster relief in Italy, Iran, as well as Japan.

He describes Tokyo Tech as "a great experience" so far because of the amazing opportunities to meet accomplished researchers and people of different backgrounds, and to learn from each other. Japan in general has really been unlike any other experience for the young researcher, not only culturally but also in terms of the earthquakes, as their mechanisms are different due to epicenters occurring, for the most part, in the ocean.

With destiny as well as connections at Kanazawa University bringing him to the Institute, Karimzadeh has since been living his lifelong dream of being a part of a great science and technology university. He advises anyone conducting research in his field to work and study in Japan, as it serves as a natural laboratory with its ample seismic activity and new technologies. In addition, Japanese universities are at the frontiers of earthquake-related scientific research, he says -- especially Tokyo Tech, with their highly regarded professors and fantastic facilities. However, believing that all fields of study and research overlap and connect somewhere, he recommends engaging in multidisciplinary work as much as possible as it will benefit society of the 21st century.

In a closing statement, Karimzadeh stated that if any good news can come of earthquakes, it would be that they signify that "the earth is alive".