Happy New Year! This year is special as the highly anticipated Olympic Games are coming to town. Are you excited about the 2020 Olympic Games in Tokyo?

This month, we feature Kamimachi - a charming neighborhood rich in history! Also a stop on the Tokyu Setagaya Line - one of two remaining lines in Tokyo classified as tramways - Kamimachi can be reached via Sangen-jaya in seven minutes after transferring from the Den-en-toshi Line.

Near the station, a flea market called "Setagaya Boro-ichi" is held on the 15th and 16th of December and January every year. Originally called Raku-ichi (literally "free market") at its inception in 1578, the open-air fair was established as a tax-free market authorized by feudal lord Ujimasa Hojo of the Hojo Clan. At the time, as the area was of particular strategic importance, the market was open several times a month. However, after the fall of the clan and the shift into the Edo period, the area saw significant changes in terms of the market itself and the items sold therein. By the time of the Meiji era, the market stalls were selling mostly used clothes and rags - called boro in Japanese, hence its current name. With more than 400 years of history, the flea market draws in a staggering crowd of approximately 200,000 people a day. It's a wonderful place to get a feel for the old days of Japan and to find rare treasures! Also, although you may have to queue in a long line to try Boro-ichi's specialty, daikan-mochi, we highly recommend you do so to taste these freshly made rice cakes!

Not far away sits Setagaya Daikan Yashiki, also known as "Setagaya Magistrate Mansion" in English. The former residence of a powerful clansman family by the name of Ooba, the mansion is the area's first nationally designated Important Cultural Property. Also at the site is the Setagaya Local History Museum, which opened more than 50 years ago, making it the oldest public museum in Tokyo. Visitors can enjoy various exhibits from Paleolithic stone tools to electronics of the Showa period free of admission. In addition, the famed Setagaya Firefly Festival & Sagiso Market is held every July on the Setagaya Daikan Yashiki grounds where many gather to watch and join Bon-odori, a Japanese folk dance, and to be dazzled by the fantastic lights of many fireflies in the evening. 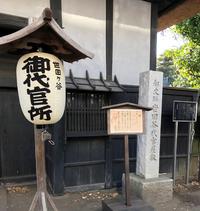 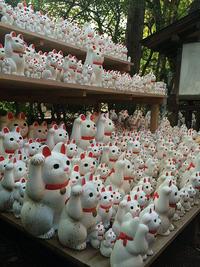 North of the station is Setagaya Castle Park, named after the castle that formerly sat atop the park's plateau. The only historic park in Setagaya City, today it offers a relaxing space surrounded by leafy trees in which you can take a walk while exploring the remnants of the fortress built in the mid-1400s, including embankments, stone baileys, and a dried moat through which the Karasuyama River once flowed. Adjacent to the park, you will find Gotoku-ji Temple, which is home to more than 1,000 Japanese maneki-neko (or "beckoning cat") figurines. The lucky charms welcome visitors upon their arrival and are believed to bring good luck. Many legends accounting for the birth of maneki-neko exist, none more popular than that of Gotoku-ji Temple, in which a cat named Tama is said to have saved the life of a feudal lord by beckoning him with his paw to follow (note that this gesture in Japan is done with the palm facing down). Intrigued, the man followed the cat to the temple just before lightning struck the tree under which he had stood mere moments before.

Lastly, the fascinating town of Kamimachi holds an abundance of vintage shops selling various items, likely intertwined with the long history of Boro-ichi, as well as delightfully fashionable cafes around the station. Let's get on the Setagaya Line to Kamimachi and enjoy walking around the town!

Hi everyone! Are you enjoying your ...